Norcross, GA  Feb. 23, 2017 – With cruise ships floating on their raw material, ChlorKing® has introduced Chlor SM salt chlorinators with specially modified plates to sanitize sea water for onboard recreational water facilities. Tests on 10 cruise ships have shown a saving of 20 to 25 percent on pool sanitization expenses and an ROI of 18 months or sooner by eliminating the costs associated with buying and onboarding bulk chlorine, a ‘marine pollutant,’ and the need to store and handle it. They also eliminate the safety risks of fires or the creation of toxic gases that can be spread through a ship’s HVAC system.

“Some 90 percent of a ship’s passengers use swimming pools, spas, Jacuzzis and even onboard water parks, and with an increased emphasis on keeping passengers on the ship with more activities to increase revenue streams, there’s an incentive to maximize the recreational water experience while cutting costs to protect margins,” said Steve Pearce, Group Executive Vice President, ChlorKing. “While cruise ship lines can buy bulk chlorine inexpensively, and they still need to buy and store muriatic acid and test their pool water to keep it in balance. With seawater as a natural resource for recreational water facilities, there’s no need to buy or add salt or chlorine, which is a toxic material and is subject to price increases. An additional benefit is that seawater adds calcium and alkalinity to the water naturally, reducing corrosion and the overall cost of operation.” 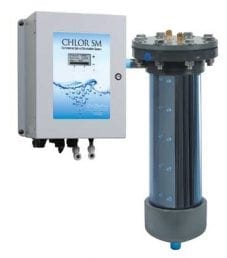 ChlorKing Chlor SM salt chlorination systems for ships are sized to produce 2 to 28 pounds of chlorine per day to sanitize pools ranging in size from 2,500 to 1,000,000 gallons.

The new Chlor SM systems for ships are sized to produce 2 to 28 pounds of chlorine per day to sanitize pools ranging in size from 2,500 to 1,000,000 gallons. All are single units with a maximum footprint of 20 in. x 20in. for the power supply and 13 in. x 28 in. for the cell housing, representing a 50 percent size reduction and 33 percent weight reduction from previous models. Their compact size and lighter weight shorten installation time. ChlorSM chlorinators systems have fewer moving parts and maintenance requirements than traditional chlorine systems and a smaller carbon footprint. They are engineered specifically for the harsh environment of commercial pools and have an unmatched 10-year service life.

“Cruise passengers will like the softer feel of the water,” Pearce said, “but they’ll love not having to shower and wash out bathing suits just to get rid of that sticky chlorine feel.”

While adding chlorine is considered the traditional way to sanitize swimming pool water, salt chlorination uses a proven 200-year-old technology, electrolysis, to convert salt to free chlorine to sanitize the water. In modern commercial pools, small amounts of salt are added to pool water, which then passes over a series of electrically charged plates that produce the chlorine. Ships can pre-set parameters to use their system’s reverse polarity to remove calcium buildup from the plates. 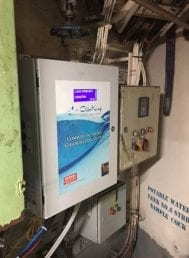 “Chlor SM systems can bring onboard technology to a higher level with better controls, self-servicing maintenance capabilities and water-cooled power supplies,” said Peter Coletto, President TGMG Inc., provider of water-sanitization and water-related systems for cruise ships. “All of these are metric measurements. Chlor SM systems can also relieve the safety and security concerns of cruise lines and safety agencies worldwide by eliminating all the problems associated with chlorine. The concerns are similar to those for land-based pools and spas, but disasters at sea or in a port can have additional consequences. We now have the technology to eliminate them.”