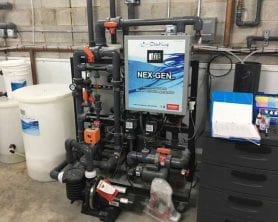 Goldfish Swim School has agreed to use ChlorKing’s salt-based NEXGEN® 20 on-site batch chlorine generators in their facilities as part of Goldfish’s commitment to safety for its students and cost-efficient operations for its franchisees.

Norcross, GA  Sept. 25, 2017 – Goldfish Swim School, one of the fastest-growing franchises in North America with over 80 locations open or in development in 23 states and Canada, has agreed to use ChlorKing’s salt-based NEXGEN® 20 on-site batch chlorine generators in their facilities. Some 30 Goldfish locations have NEXGEN systems as part of Goldfish’s commitment to safety for its students and cost-efficient operations for its franchisees.

“We applaud Goldfish for eliminating the use of volatile, toxic bulk chlorine, which can be especially harmful to children when they’re exposed to chlorine gas by human or mechanical failures, and we are pleased they’ve selected our NEXGEN systems,” said Steve Pearce, Executive Vice President, ChlorKing. “Pool evacuations and the hospitalization of children because of chlorine-gas exposure, which were in the news all summer, are totally avoidable when pools use salt-based systems to sanitize the water.”

NEXGEN technology generates pH-neutral liquid chlorine, chemically known as bleach, from salt, which is stored onsite. In addition to eliminating the need to store bulk chlorine, it eliminates the accidental mixing of chlorine and muriatic acid by human error, a major cause of chlorine-gas releases.

“Using ChlorKing’s NEXGEN chlorination systems gives us everything we need to protect the health and safety of our students and the peace of mind of their parents,” said Chris McCuiston, CEO and Co-Founder, with his wife, Jenny. “Our entire franchise program is built on setting up locations for success to develop strong, safer swimmers, and our relationship with ChlorKing fits right in.”

“By eliminating the need to store and handle bulk chlorine, we’ve reduced the risk of chlorine-induced safety threats,” he continued. “Many communities are recognizing the hazards of chlorine and requiring the construction of special storage facilities for it. Our ChlorKing systems eliminate those requirements, too.”

In addition to eliminating the safety issues associated with bulk chlorine, ChlorKing provides long-term price stability. Salt, the chemically inert raw material, costs less than bulk chlorine and is not subject to price volatility. NEXGEN systems can produce liquid bleach for sanitization for 43 cents per gallon, which is about one-fifth the cost of bulk chlorine. Automated feeders add salt to the NEXGEN production tank as required to maintain safe disinfection levels. With NEXGEN, no salt is added to the pool, and salt levels don’t need to be maintained in the water. Franchisees can also add Sentry UV light systems as a supplemental disinfection to destroy chloramines and inactivate waterborne pathogens on contact. Some Goldfish Swim School locations use ChlorKing’s 36- and 60-month Equipment Supply & Maintenance Programs to trade a large capital outlay for a fixed monthly payment.

“As far as we can see, there’s just no reason to risk anyone’s safety with bulk chlorine,” Pearce said.

Founded by husband and wife team, Jenny and Chris McCuiston, Goldfish Swim School provides swim lessons and water safety instruction to infants and children ages four months to 12 years. Classes are offered by specially trained instructors in a safe, child-friendly and fun environment. Goldfish currently teaches more than 70,000 students per week to swim and be safer in and around the water. Headquartered in Troy, Michigan, Goldfish Swim School was established in Birmingham, Michigan, in 2006 and opened its first franchise location in 2009. They are currently in the process of expanding franchise opportunities throughout North America, with over 80 schools open or in development in more than 23 states and Canada.

Some 30 Goldfish locations use ChlorKing’s salt-based NEXGEN® 20 on-site batch chlorine generators to eliminate accidents associated with bulk chlorine as part of their commitment to safety for students.